As we begin 2013, our 20th anniversary year, we are excited to build the capacity of Studio G’s team with the following staff promotions and new hires:

Studio G Architects founder, Gail Sullivan has assumed the role of Managing Principal. Sylvia Mihich, a key member of Studio G for more than twelve years, focuses her innovative design and problem solving skills and expertise in construction documentation in her new role as Principal. Tamar Warburg, who has contributed a passion for design quality and commitment to business development for over six years, has also been promoted to Principal. Tamar has spearheaded Studio G’s foray into design for modular construction. Janice Reilly has been promoted to Principal of Business Administration after more than twelve years of dedication to Studio G’s mission and developing a sustainable business. 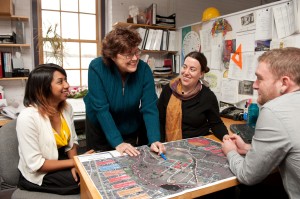 Robin Greenberg has been named Associate, having demonstrated for over eleven years her exceptional multi-tasking skills in diverse project types. Robin also oversees Studio G’s professional development. Steve Michener has been promoted to Project Manager after more than five years at Studio G, for contributing strong design ideas on a variety of projects, as well as a capacity for thinking through complex construction details. Meghan Krieger and Gabriela Shelburne have been named Job Captains in recognition of their professional growth, and organizational skills that allow them to juggle multiple project demands. Tearar Chan has been promoted to Interior Designer, recognizing her design contributions to Studio G projects. 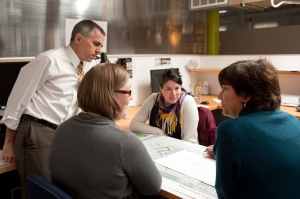 Rounding out the team, Rebecca Caprara is Studio G’s new Assistant Marketing Director; Dan Jick, recent M.Arch from the School of the Art Institute of Chicago, and BAC M.Arch candidate, Darice Cadriel, have joined Studio G as Designer I and Designer II, respectively. 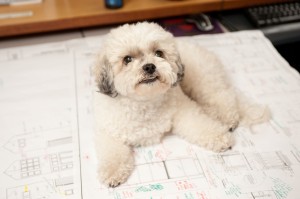 Even Murphy has been promoted! Meet our new Office Greeter and Chief Security Officer