On January 15, 1919 Boston experienced one of the most significant events in its history, The Great Molasses Flood.

Gail Sullivan, our founding principal reflects, “The Molasses Flood in Boston’s North End 100 years ago today has been a vibrant element of my imagination since childhood. My father, who was a young boy in Brighton then, occasionally told the story of molasses flooding the dense North End streets as a kind of Boston folklore, simultaneously horrifying and captivating. As an architect whose work encompasses preservation of Boston’s historic fabric and design of contemporary new buildings, I was fascinated to learn the role that the flood played in establishing safety regulations to prevent similar disasters.” 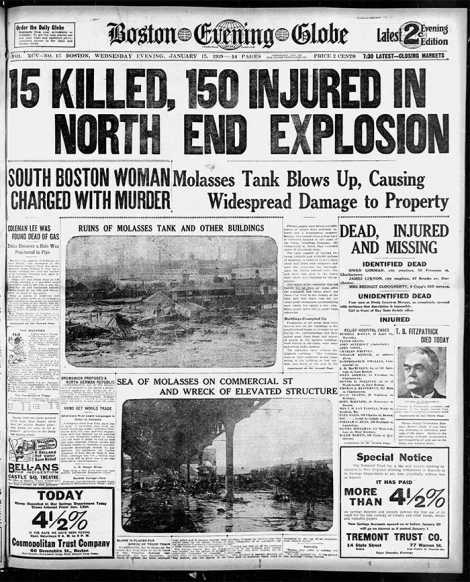 In its anniversary coverage, NPR shared the story of this tragic event where 21 people were killed and 150 people injured in the immediate area, with far reaching impacts beyond the North End.

From today’s NPR article, “According to Stephen Puleo the case set the stage for future class action lawsuits and was, “the first case in which expert witnesses were called to a great extent — engineers, metallurgists, architects, technical people.”

The case also completely changed the relationship between business and government, “All the things we now take for granted in the business, that architects need to show their work,” explains Puleo, “that engineers need to sign and seal their plans, that building inspectors need to come out and look at projects — all of that comes about as a result of the great Boston molasses flood case.”