Chuck Turner, Fred Salvucci, Charlotte Kahn and David Lee read from their interviews and discussed the history, as well as concerns today in Boston neighborhoods, especially Roxbury, about gentrification and displacement resulting from development that doesn’t prioritize the needs of Boston residents.

Studio G Architects, with a focus on building sustainable communities, has partnered with Rees Larkin Development on proposals to the City of Boston DND for development of Parcels 2 + 4 in the Marcella Highland neighborhood. Our fresh, innovative, green, and community-oriented design achieves E+ (energy positive) and goes beyond the RFP requirements by implementing Passive House standards.

In addition to achieving a high level of sustainability and design quality, the proposed income-mix for the development extends affordability well beyond the guidelines set forth in the RFP – responding to the neighborhood and City’s deeper affordability goals to ensure that existing Roxbury residents can purchase homes. 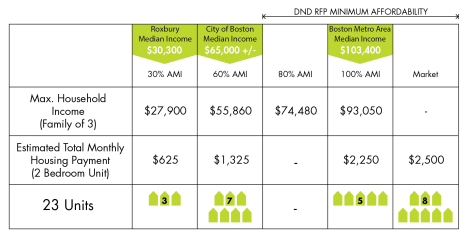 The proposed limited-equity cooperative structure, which the DND strongly encouraged in the RFP, will allow the development to:

The deeper income targeting offered by our proposal, with homes targeted to families at 60% and 30% of AMI, would not be possible in a structure that involved the sale of individual, or single-family, homes in fee-simple interest.

Randy Foote, a Master of Science candidate at the UMass Boston School of Urban Planning and Community Development, a resident of a cooperative in Highland Park, and a proponent for this approach published a paper in 2017 titled Cooperative Housing as a Policy Tool. In his paper, Randy dives into the nuances of the cooperative structure, its history, and how it can benefit future development for the City of Boston.

Let’s quickly answer a few questions concerning this financial approach that can provide affordability, stability, and equity to Boston’s residents.

Here’s an article that tells the story of LEC’s put into practice providing the resident, municipality, and developer perspective.

So, equity growth is limited; however, co-op members get in for no money down and affordability is maintained into the future. This a huge advantage for many people — even those with higher incomes.  And for those with low or even moderate incomes, it’s a greater advantage and may be the only way for them to achieve homeownership.

By applying the Limited Equity Co-op structure, our Marcella-Highland proposal with Rees-Larkin Development prioritizes the needs of its residents AND addresses the housing affordability and stability goals of the City of Boston.